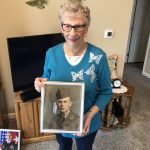 Barbara is a widow of her late husband, Loren, who served in the army in the 1950s. Barbara’s family loves to serve our country as Barbara’s son, daughter, and son-in-law serve in the military. Barbara’s husband, Loren, served as a maintenance radio operator during his time in the army. Loren was stationed in Missouri, Georgia and Alaska. The two of them always wrote letters to each other, and Loren always expressed how he loved the Northern Lights. Excel thanks Barbara’s late husband Loren for his service to our country as well as her other family members that have served and are currently serving.